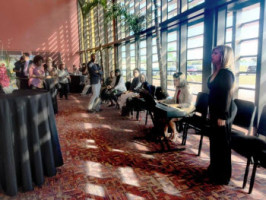 By Judy Pokras In one of the many entertaining moments at Broward Cultural Council’s recent 2016 planning forum, the coloratura soprano voice of Florida Grand Opera singer Laura Martinez León appeared startlingly unannounced, with the…

In one of the many entertaining moments at Broward Cultural Council’s recent 2016 planning forum, the coloratura soprano voice of Florida Grand Opera singer Laura Martinez León appeared startlingly unannounced, with the Queen of the Night’s aria from The Magic Flute, her light, agile voice attaining Fs above high C, piercing the din of cocktail conversation like a soft alarm. As nearly 150 people enjoyed Alberte’s Caribbean Food in the 25-foot-high ceilinged reception area of the new Lauderhill Performing Arts Center, the gentle flash mob performance brought smiles.

Guests mingled, enjoyed the photography of Tabatha Mudra and Eileen Escarda in a mini 40th Anniversary Public Art & Design exhibition at the reception in the LEED-certified performing arts center, designed by Westlake Reed Leskosky. The compound also houses a 20,000-square-foot library. House Manager Suzette Gross gave guests a tour of the warm, terra cotta painted space, pointing out such design elements as the wooden handrails in the upper orchestra and the balcony’s outdoor reception terrace, with its view of the Lauderhill Clock Tower. A perfect location for the Broward Cultural Council’s Annual Planning Forum.

After networking, attendees were asked to enter the large auditorium and sit on the stage, auditorium-style, facing its back wall. There, we were delighted with a performance by Florida Grand Opera singer Sarah Payne, whose arrestingly large dramatic soprano voice was well matched to the aria Dicht teure Halle! from Wagner’s Tannhäuser. Pianist Maria Paulina Garcia accompanied both singers. Payne was introduced by Graham Fandrei, director of the Florida Grand Opera’s Young Artist Program, who was followed on stage by Earl Bosworth, director of the Broward Cultural Division, with a welcome to the audience. City of Lauderhill Mayor Richard J. Kaplan spoke about the dream that was the performing arts center in the 1990s and thanked Broward County for providing half the funding for it. Broward County Commissioner Stacy Ritter followed, saying, “We want to say to our state legislators that we have an economic impact,” in encouraging cultural organizations to get involved with an Arts Economic Prosperity 5 report that allows the arts and organizations in the county to be counted for advocacy and legislative purposes.

Tracy Roloff, chair of the Broward Cultural Council, next appeared at the podium, lauding seven national marketing awards this year won by the Division, also outlining the many programs it has launched. The audience was then wowed by Randy Corinthian, saxophonist, producer and arts educator, who performed along with a recording of Ladybird 1939 by Tad Dameron, in honor of April being Jazz Appreciation Month.

Among the many things Bosworth told the audience, he said, “We were third or fourth in the country in terms of art budgets.” The Broward 100 centennial celebration reached parts of the community that the Division had never reached before, he said. One of the Division’s new initiatives includes Fruio, a mobile platform that will bring the arts even closer to audiences. The final performance, by Flamenco dancer Angeles Gitanos, in a ruffly red dress with long white fringes, showed her stomping her red Mary Jane heels as the audience clapped in rhythm. Cultural Division Assistant Director Jody Leshinsky then appeared, announcing to the disappointment of many that she will be retiring after 35 years. She said that when she first moved to the area in 1979, the only things to do were visits to the mall or the Parker Playhouse. Now there is a whole lot going on, she noted, with events and artists competing with each other.

The event ended with an audience question-and-answer forum. In answer to one of the comments, Bosworth said, “We’re working on the local music situation. As a musician, it’s one of my goals to see that all artists get paid.” He also said that the Division is looking into working with the County’s cities to see how to include them all.

This is the Broward Cultural Division’s 2016 Annual Planning Forum. It announces the start of a new cultural year, steering the way towards growth and development in the creative industries of Broward County.