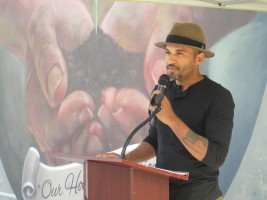 When does a mural become a part of the community? Since January, Oakland Park residents on their morning rounds riding bikes and walking the dog have been eyeing the richly hued mural taking shape against…

When does a mural become a part of the community? Since January, Oakland Park residents on their morning rounds riding bikes and walking the dog have been eyeing the richly hued mural taking shape against the new building along Dixie highway. They watched a young artist climb around the scaffolding, dabbing pigment inch by inch day by day. Many admired from afar, nervous to come close – unsure if the mural was really for them to examine and touch.

It was good time for a formal introduction – and Oakland Park got to meet their own mural face to face recently at the official unveiling of the city’s own Broward 100 mural, “Hometown Choice.” Residents and city commissioners gathered in a special ceremony to commemorate the addition and chat one-on-one with the artist – internationally renowned muralist Elio Mercado, a.k.a. EVOCA1. The project is part of the county-wide VisualEYES project, commissioning murals from acclaimed South Florida artists to create works representing the unique character of ten select Broward cities.

For Oakland Park, artist Elio Mercado created an intimate portrait for the family-oriented city with a budding, rich cultural scene. The mural honors the city’s past, with a sepia-tinted depiction of Oakland Park Elementary, built in 1926. And the mural nods symbolically to the future, with beautifully painted hands clasping a young oak sapling.

The mural’s location – the city’s Art Park – is a budding cultural and communal site as well. Primary construction has just been completed on the adjacent Roselli Park Plaza, the planned heart of the new Culinary Arts District of Oakland Park/Greater Fort Lauderdale. The center will include a restaurant and the Greek-inspired AGORA Marketplace. So in many ways, the mural unveiling also gave a peek into what the entire center will soon be – the perfect place to explore organic goodies and have a picnic alongside works by celebrated artists.

“We’re so happy to have this special work in our city,” said Oakland Park Mayor Tim Lonergan at the event. It was a pleasure “working with the artist,” said Lonergan, to create a mural portraying the spirit of the city, and “we think it turned out so beautiful, and represents Oakland Park so well.”

Mercado also said a few words, thanking the city and the Broward Cultural Division for a chance to portray his home county. He also called for applause for his little apprentices in the audience – the young students from Oakland Park’s after-school program who contributed to the mural with their own handprints

Then it was picture time, as residents gathered to take photos with their new mural, the kids particularly beaming with their handiwork. For them, this will surely be the first of many visits and many photos to come as the city’s art scene grows with them.