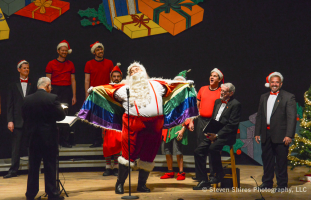 Uncle Sam is staring directly into your eyes. “I Want YOU,” he demands from the center of the Fort Lauderdale Gay Men’s Chorus recruiting poster. The YOU he is referring to are men who can… 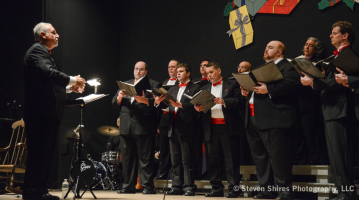 Uncle Sam is staring directly into your eyes. “I Want YOU,” he demands from the center of the Fort Lauderdale Gay Men’s Chorus recruiting poster. The YOU he is referring to are men who can sing. Despite the troupe’s name, the person doesn’t need to be gay. “Straight men are welcome. It doesn’t matter,” explains Chorus President Bradley Bush. “It’s all about enjoying singing in a show. As long as you have a voice to sing with, you can join.”

Now in its 30th year, the group originally known as the Gay Men’s Chorus of South Florida holds the distinction of being the first gay chorus in Florida, as well as the first gay arts organization in the state. Throughout its history, the size of the group has varied widely, at one point constituting more than one hundred voices. Twice splitting into separate choruses, the group currently includes twenty members. To differentiate the organization from other local singing groups, they changed their name several years ago to the Fort Lauderdale Gay Men’s Chorus.

The Chorus presents three major concerts a year, with the next show scheduled for Saturday, March 19th.  A June concert, followed by a holiday-time event will round out the performance year. They also have a cabaret style show in the fall called “Fall Follies” as a fund raiser that showcases the talents of chorus members though solo and duet performances.

Civic engagement and community participation are central components of the group’s mission. In addition to their regular concerts, they perform free of charge at nursing homes, hospitals, holiday celebrations, and civic events. The Chorus was a popular attraction at Broward County Cultural Division’s signature “Duende” event celebrating the County’s 100th Anniversary. “We’re always open to new community events,” says Bush. “If we can get it into the schedule, we’ll do it.”

The group’s Artistic Director, Dr. Gary Keating, is credited with originating the group in 1986. He left the group after ten years, but returned in 2012 to direct a special concert. He enjoyed it so much, he ended up staying. “You guys woke something up in me,” he explained on the organization’s website.

Keating also serves at as the Director/Conductor of the Choral/Vocal Magnet Program at Dr. Michael M. Krop Senior High School in Miami. Keating’s “day job” has been pivotal in helping the group attain another goal: establishing a youth chorus. Toward that end, they plan to add young voices to their own for the March concert.

Young or old, the Chorus is always on the lookout for new members, hoping eventually to expand to 30-35 members, but no larger. “Smaller groups are more fun and let you learn the music quicker,” says Bush, who has enjoyed the group immensely since joining in 2003 at the request of a friend already in the chorus.

The first step to becoming a member is to audition. “It’s nothing formal,” says Bush.  No prior singing experience or ability to read music is needed. “Members must only be able to carry a tune and match pitch. The Director just needs to hear the voice so he knows where to place you in the chorus,” says Bush.  Those selected are assigned a “buddy” to ease their transition into the group.

Being a member “is great social interaction,” says Bush. ”I just really, really enjoy it,” surely words seldom associated with any of Uncle Sam’s other recruiting efforts.

More information on the Fort Lauderdale Gay Men’s Chorus can be found at: