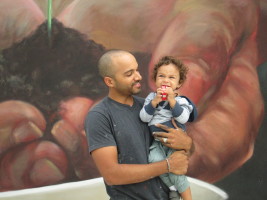 In the new mural titled “Hometown Choice,” just beyond a child’s hand cradling an oak sapling, you see the sepia-tinted columns of the historic Oakland Park Elementary, the county’s oldest school still in operation. Opened 90 years ago in 1926, the school served 200 children living in the then nascent farming town of Florinada. Throughout the years, the building’s Spanish stucco walls served as a hurricane shelter (still is today), a political debate hall, and a community center – providing insight into a broader world for generations of children.

The mural also holds a secret ode to today’s kids, with fingerprints underneath the painting’s border. Grade school students from Oakland Park’s after-school program joined in during the painting process, plastering rainbow-colored hand-prints along the border, as high as they could reach.

“Some of the kids didn’t believe they could paint on the wall. ‘Like really, I won’t get in trouble’?” remembers Mercado. “But when they got that it was alright, they really just went for it.”

This mural is a natural fit for Mercado, known for his sensitive portrayal of children in massive urban murals from Berlin to Mexico, often highlighting the global inequity and violence that so disproportionately affects society’s youngest. In EVOCA1’s painterly world, danger lurks at the edges, whether it’s a Civil War drummer boy going off to battle in the Richmond, Virginia mural “Glory,” or a languid girl leaning against a muzzled, massive Doberman in the St. Petersburg mural “Through the Perils of our Youth.”

But here, in this quiet corner, the children are safe. As Mercado put on the final touches to the mural, his toddler son cuddled by his knees, begging to be lifted higher for a closer look. Here in the Art Park, kids can be kids. They can look at things closely, point and touch all they want. They can ask questions; get their hands dirty with paint and dreams of the world waiting for them.