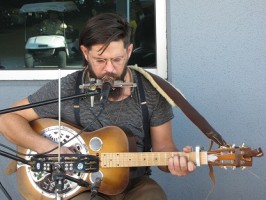 “Drum roll,” yelled out Broward Cultural Director Earl Bosworth before a large tarp was slowly rolled up by rope to unveil Nate Dee’s mural “Feathers of Hope” on the side of the Edgar P. Mills Multipurpose Center in Ft. Lauderdale Oct. 1. After about two months of hard work, Dee’s project for VisualEYES and Broward 100 was complete.

In front of the large crowd who had assembled, Dee explained the themes within his piece, including family and hope.

“The bands of color stand for the idea of currents of possibility, possibility of change. I am a strong believer that we can make our own reality. The dove is going to represent the idea of love and hope. It is perched. The idea is that, in the building, love and hope are fostered,” said Dee, who also shared that the oak tree, also pictured, is historically valued for its multi-uses, from corking to building, and it is also native to Florida.

He also thanked everyone at the center for helping make the process easier.

Before working on the mural, Dee connected with community leaders to get their input as to what the community was about; he sought to bring out that spirit within his painting. Those who saw the finished product definitely felt he was successful in that endeavor.

“I think it is fabulous … the opportunity to share this art with our community,” said Patricia West, director, Family Success Administration Division.

In attendance was Greater Fort Lauderdale Convention and Visitors Bureau Representative for Art of Community Programming Justin Flippen. He was one of the people involved in choosing Dee as one of the 10 artists to participate in VisualEYES murals (one in each County Commission district, plus one at Port Everglades).

He said that Dee’s vision inspired him most because “his style represents community engagement … That’s what the VisualEYES mural is supposed to represent.”

The community came out to support Dee in a way he has not quite seen before.

Regarding other mural openings, he said, “It has never been quite like this.”

In addition to Dee gracing the podium to speak, County Commissioner Dale Holness and Assistant  to the County Administrator Alphonso Jefferson spoke, in addition to Bosworth.

Joshua Diaz, from the Band Kids performed while guests enjoyed light refreshments. Representatives from Fruio filmed the event, including obtaining interviews with Dee and others. Visit Fruio.com to see video, which should be available soon.