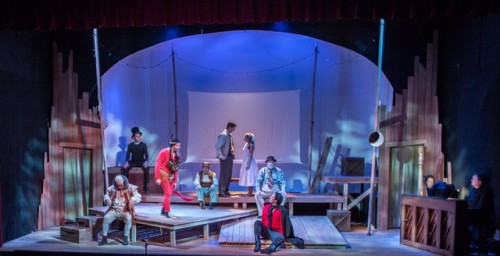 The Stage Door Theatre's Winning Production of The Fantasticks

The world’s longest-running musical, "The Fantasticks" is about youthful innocence becoming disillusioned, about how, “without a hurt, the heart is hollow,” as the breakout song “Try to Remember” says. It’s about how “we all must die…

The world’s longest-running musical, “The Fantasticks” is about youthful innocence becoming disillusioned, about how, “without a hurt, the heart is hollow,” as the breakout song “Try to Remember” says. It’s about how “we all must die a bit before we grow again,” as its narrator El Gallo says.

With a book and lyrics by Tom Jones and music by Harvey Schmidt, The Fantasticks debuted in 1960 in New York City, and ran off-Broadway for 42 years and an astounding 17,162 performances. The enchanting production by the Stage Door Theatre in Margate runs through October 11. It’s in a small theater whose intimate setting well suits the production.

The Fantasticks begins with twinkly ethereal music, which sets the stage for the entrance of Luisa (Molly Anne Ross), the wide-eyed teenage girl who is one of the romantic leads. The endearing musical numbers, the heart of the show, are luminously played by Dave Nagy on piano and Kay Kemper on harp. As Matt, the boyishly appealing Alexander Zenoz charms with his lyrical singing and gifted acting. He has real chemistry with Ross, who has her own beautiful singing voice and personifies the wide-eyed Luisa. (Ross says in her program bio that this is her all-time favorite show, and that comes through in her performance).

Anyone who loves words will appreciate Jones’s clever lyrics in such songs as “Plant a Radish” and “Never Say No.” On the tender side of things, The Fantasticks features two of the prettiest love songs ever, “They Were You,” whose words and music are perfectly meshed, and “Metaphor,” with its haunting melody and sweet lyric: “Love, you are love, better far than any metaphor can ever ever be…”

Director and choreographer Dan Kelley dazzles with his eye-catching staging on the attractive multi-level wooden set designed by Ardean Landhuis. For example, in a witty move, at one point Matt steps up onto a higher level platform at the exact moment that he sings a higher note; and in another, El Gallo sends Luisa into a spin during the song “Round and Round.” Also impressive are playful touches that echo the playful lyrics, like the way the production presents snakes.

The Fantasticks includes roles for three older actors, whose appearances in this production lean towards the clownish. The actors playing Luisa and Matt’s respective fathers (both of whom look old enough to be their grandfathers) are full of personality and intensity, with Luisa’s father, Henry (Michael Small), a cross between the loud, raspy-voiced comedian Gilbert Gottfried and the rubber-faced Burt Lahr in his cowardly lion role in “The Wizard of Oz.” (In an ironic twist, Lahr played Matt’s father in a 1964 Hallmark Hall of Fame telecast of The Fantasticks.)

As Matt’s dad, Hucklebee, the large Larry Kent Bramble is light on his feet as he moves across the stage. Alan Gerstel shows obvious relish in his role as Bellomy, a theatrical actor. His scene partner, Sebastian Lombardo, is energetic as Mortimer, a Native American with an English accent, but a small action he performs in one scene is gross and does not belong in the production.

Pierre Tannous, as The Mute, exhibits real control as he mostly watches the action without speaking, his face reflecting whatever emotion the actors are displaying. In one scene, as he moves to pantomime the rebuilding of a wall, Tannous, with his tall, lean physique garbed in black, brings to mind Conrad Veight playing the sleepwalker in the silent 1920 German Expressionist film “The Cabinet of Dr. Caligari.” Last but not least, Pedro Kaawaloa Jr. is commanding as El Gallo. A dashing figure in a red shirt, black trousers and boots, he embodies the authority and objectivity that befit his role as the narrator, anchoring the show, and he also doubles as a bandit.