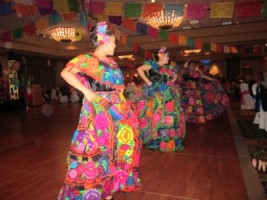 Question: What recent Coral Springs event was not only festive and fun, but just happened to address what are arguably the two most serious problems facing the world: global warming, and the violence and strife…

Question: What recent Coral Springs event was not only festive and fun, but just happened to address what are arguably the two most serious problems facing the world: global warming, and the violence and strife that are preventing worldwide peace? Answer: It was the International Mexican Dinner Dance. Held at the Marriott Hotel in Heron Bay, the event captivated the 400 or so people who paid $55 each to experience its colorful Mexican decorations, authentic Mexican food, and eye- and ear-catching performances, and to enjoy the company of people from many cultures.

Guests were dressed in distinctive and beautiful outfits — many in the style of Mexico, while others wore clothes reflecting the countries of their heritage. Like a wedding reception, the merry dinner dance featured a photographer who took pictures of each table, tables named after Mexican locales.

This is the 20th year that Coral Springs has held an International Dinner Dance. The event, which celebrates a different country and culture each year, has grown through word of mouth. As it’s not a fund-raiser, the dinner dance just manages to break even. Except for two city employees, it’s staffed by volunteers.

Gladys Castro, a founding member of the city’s Multi-Cultural Advisory Committee, has been the chair of the International Dinner Dance since it began two decades ago. Coral Springs hosts the gala annually to celebrate the diversity of the city’s population and, as Castro said, to “reinforce our appreciation for the unique contribution each community member brings to our city, making Coral Springs a richer, more interesting, more exciting and vibrant community.” The city’s greatest gift is its people, she said.

Speaking in the large, gaily festooned banquet room, Castro said, “Cultural differences should not divide us from each other, but rather create a collective strength that can benefit our community.” Indeed, bringing people from different cultures and backgrounds together, as Coral Springs’ dinner dance does, is something that ought to be done worldwide. Such an approach could go a long way towards preventing the fear of other cultures that all too often leads to wars and violence. Joyce Campos, community relations manager for Coral Springs, one of the two city employees involved in the event, said in a phone interview that she would like to see other cities hold similar multi-cultural events.

In addition, by holding its International Dinner Dance, Coral Springs makes it possible for people to have the experience of traveling abroad without their adversely affecting the ozone layer by flying long distances. As NASA writes, aircraft exhaust produces “condensation trails in the atmosphere about 5 miles above the earth’s surface.” And these “contrails” contribute to global climate change, NASA writes. Thus Coral Springs is helping in its own way to avert a climate catastrophe!

Among those attending the dinner dance was Enrique J. Zuanetto, the executive director of The Soup Kitchen, a free restaurant in Boynton Beach for poor people. As the dinner dance coincided with the first visit to the United States by the much-admired Pope Francis, I noted that The Soup Kitchen brought to mind the Pope, with his concern for the poor. Zuanetto began flipping through his smartphone to locate a photo he had shot the day before, of Pope Francis waving to crowds in New York City from his little Fiat! It turned out that Zuanetto, who is originally from Argentina, has a connection with Pope Francis. Fifty years ago, when Zuanetto was a student at Leon XIII, a Catholic School in Buenos Aires, Pope Francis (a priest at that time) had visited the school to celebrate Mass. “At that time, he was already an amazing person!” Zuanetto said.

Back in the many-tabled banquet room, Haitian-born Jean-Richard Thelemaque, an engineer, and his Haitian-born wife, Marie-Arnode, a nurse, said they have been coming to the international dinner dance for 14 years. The Coral Springs couple were attending this Mexican one with their 16-year-old American-born daughter, Nathalie, a published author of the book “Misconceptions,” whose second book is due out next month. Thelemaque said the event gives people a chance to mingle and have fun with different cultures. “People will be dancing to each other’s music,” he smiled. 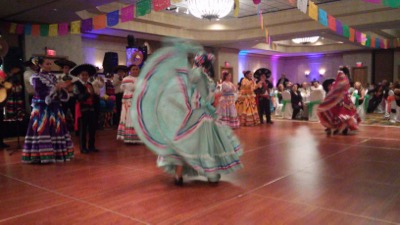 After the buffet meal, there was entertainment by Noche de Muertos (a Day of the Dead celebration), Mariachi Voces de America, and Ballet Folklórico Timanati. There was also a silent auction (for which Coral Springs Commissioner Joy Carter, on hand for the festivities, had helped with the baskets). The evening ended with deejay dancing.

Castro gave a special thanks to board member Laura Lopez and her family, for all of their hard work in making the event a success. Lopez’s son, Alfred, an artist sporting a Mexican “moño” (bowtie), built and painted the colorful signposts, and hung the “papel picado” (cut paper) decorations. His mother, who wore a colorful floor-length Mexican dress, had conferred with Jaime Peña, Executive Chef at the Marriott, to create a menu that featured such fare as Jicama Salad with Mango; Steak Fajitas; and Carnitas (roasted pork baked in banana leaves), not to mention a wide variety of Mexican desserts.