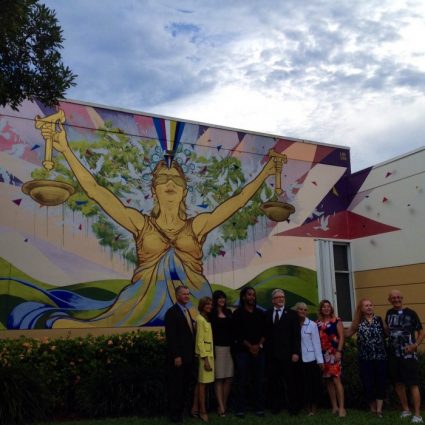 [caption id="attachment_309" align="alignright" width="200"] Artist Ruben Ubiera and Tamarac city officials pose for a photo during the unveiling of Ubiera's mural "Lady Justice."[/caption] By the time “Lady Justice” was officially unveiled to the public last…

By the time “Lady Justice” was officially unveiled to the public last month, many Tamarac residents had already seen her. Artist Ruben Ubiera had been working on the mural almost every night for weeks.

“We saw it transform,” said Linda Danner, who regularly walks with her husband along the busy street the mural faces. “At first, we couldn’t figure out what was going on with it, but finally, we saw it come to life.”

In public remarks, Tamarac Mayor Harry Dressler said the mural “carries a strong message.” For Danner, it’s a goal of fairness and inclusion.

“She’s not looking at you making a judgment,” said Danner, 55.

During the unveiling, a black sheet covered the Lady’s head and arms. Ubiera and city officials pulled the sheet down together before posing for photos with her towering over them.

“The green represents to me a lot of life,” said Bob Fortier, 65.

The color green — described by another attendee as “Spanish moss” — sprouts out from all around Lady Justice, and in the waves that run along the bottom of the mural.

In each hand, she holds a scale, whose grips resemble the letter T.