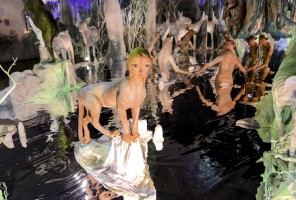 Leah Brown's Sculptural Installation is Like Walking into a Dream

You walk through a portal flanked by two enormous sculpted hands, into a darkened hallway whose walls are made of draped fabric. The hallway opens into a darkened room with a high ceiling, a surreal space…

You walk through a portal flanked by two enormous sculpted hands, into a darkened hallway whose walls are made of draped fabric. The hallway opens into a darkened room with a high ceiling, a surreal space populated with unusual beings not found in everyday life, who, along with foliage, cast eerie shadows, and you feel like you have walked into a dream. This is the exhibit “Transformation of Echo World of Dreams” at Young at Art Museum in Davie, by artist Leah Brown.

Brown (whose first name is pronounced like the iconic character Princess Leia played by Carrie Fisher in Star Wars) created this environment of hybrid “animal people” and mirrored mylar ponds as a “cross-dream narrative” and a “borderland between what is considered real and not.” In an artist’s statement, she writes that because shape-shifting is a common dream experience, she is trying to recreate that in her life-sized tableaux of characters and events she has dreamt about, almost like a “cross-dream historian,” she said in an interview. She creates the objects and characters from plaster, clay, found objects, hair, and fabric castings from life. “These works begin as illustrations, but become artifacts of invocation, and I regard them almost as magical objects,” she writes.

The Ft. Lauderdale-based sculptor and installation artist comes from a very creative family. She was inspired as a child by her father, whose musical instrument-making workshop was right next to her bedroom. As a girl, she used to build things in his workshop. Her mother is a stained glass artist, and her maternal grandmother was a doll maker, who left all of her doll-making supplies to Brown. “I grew up in a culture of making,” she said.

In high school, Brown became enchanted by the Pre-Raphaelites and then was very influenced by the Surrealists, about such things as what it means to be human, she said. Their work inspires her to this day, she said. A graduate of Rhode Island School of Design, she learned a lot about mold making and casting techniques and how to work quickly on a large scale while employed by an art fabricating company that assisted artists at the international level.

Among the projects coming up for Brown is an interactive light exhibit, as Ft. Lauderdale awarded Brown and her sculptor husband, Peter Symons (who together have a public art and design collaborative, Art+Light+Space), a contract to redesign a public water tower. Brown’s evocative, mysterious, dreamy exhibit “Transformation of Echo World of Dreams” runs through Sunday, January 3, 2016, at Young at Art Museum, 751 S.W. 212 Avenue, Davie. Hours are Monday through Thursday, from 10 a.m to 5 p.m; Friday and Saturday, 10 a.m to 6 p.m and Sunday 1 a.m. to 6 p.m. Admission is $14 per person; $12 for Broward County residents, seniors and children over age 1; and $1 for miltary members and their immediate familes. For more information, call 954-­424-­0085.