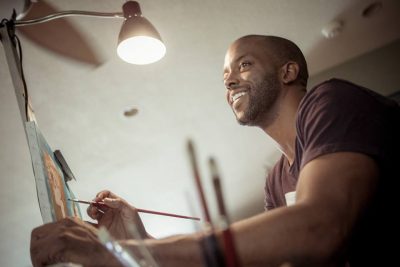 Born and raised in South Florida, Nathan Delinois (Nate Dee) has numerous influences... this includes his Haitian background and the use of color in a lot of Haitian art, as well as in street art. The design quality of the Art Nouveau movement and the drama of Greek art from the Hellenistic. These elements can be seen in his work. Additionally, he takes some influences from the pop surrealists.

He has been featured in magazines such as Delve, Making Waves, WeMerge, DUO & the Miami New Times. In 2014 The New Times listed him as one of the 10 Miami Artists to follow on Instagram. In 2013 he was also given an Honorable mention by the magazine for their 2013 Miami Masterminds awards. He's been featured on multiple blogs and has displayed his work in exhibits throughout South Florida.

Statement: The series that I am working in is similar to a potpourri with a mélange of images and patterns. Usually based on a figurative element that is the focal point, the images and patterns are representative of my personal experiences, ideas, and philosophies. Although each piece is usually a direct response to the text contained with in, I still try to keep the actual meaning as ambiguous as possible. I want the viewer to find his or her own meaning and relationship to the artwork. At first glance there is a sense of whimsy in my work that is grounded by its urban visual elements.