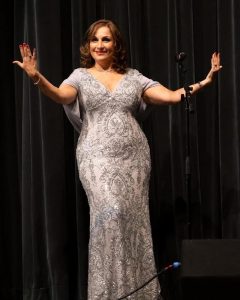 Alexandra Marie, Singer, show producer
I. Artistic Merits and Accomplishments
A native from Argentina, this Argentinean-American International Lyric Soprano, educator and songwriter challenges her unique voice through wide and diverse repertoire with a flexibility hard to find among classically trained singers. In 1990, she arrived in the United States continuing her education, receiving scholarships from both the New World School of the Arts/ MDCC and later Florida International University. Alexandra Marie has appeared with Symphony Orchestras such as The Coral Spring Pops, the Hallandale Pops and sang with Zarzuela companies both in South America and in South Florida such as "Grateli", among others.
Alexandra Marie released her second CD entitled “Esencia de Mujer”, featuring Latin women composers and historical female figures from the Americas, which was recorded in Argentina with the finest musicians from the Pampas. Alexandra was featured in the 2013 CD compilation: “TANGO in Miami”, cultural initiative by the Consulate General of the Argentine Republic in Miami. Alexandra Marie received consecutive grants by the Miami Downtown Development Authority to produce concerts for Miami Arts Day 2015-2018, performing with Florida Grand Opera pianists Sergio Puig and Paul Swartz, and bandoneon Miguel Arrabal. These highlighted concerts, “Beloved Melodies of the Americas”, “Sunset Terrace Concert” at the Cisneros Foundation can be found in her website with an eclectic repertoire from the Americas and Beyond. Alexandra is currently music teacher at iPrep Academy, where Superintendent Carvalho is principal.
Her future engagements include the 35th Argentine Festival in the USA, Arligton Virginia in May and the Summer Symphony Series concert with the city of Pembroke Pines performing "Vocal Works by Symphonic Composers", accompanied by Paul Schwartz, pianist from Florida Grand Opera at the Charles F. Dodge City Center in June 12.
You can learn more about this distinguish Argentine Performer visiting www.alexmarie.com