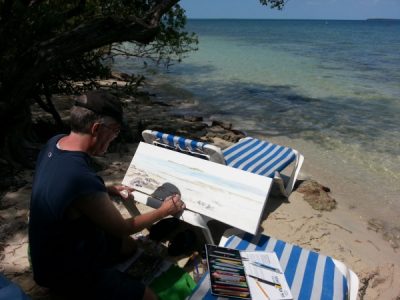 Born in Chicago, artist William Bock began his professional career at Indiana University, followed by an apprenticeship at the Johnson Atelier Technical Institute and School of Sculpture in Trenton, New Jersey. He received his Masters of Fine Arts degree at the Maryland Institute College of Art in Baltimore in 1987. Marine wildlife, seashells, and tropical flora and fauna are recurring themes in his artwork. In 1994 he moved to South Florida to surround himself with the tropical landscape that inspires his work. William Bock possesses an innovative style that revolves around his love of nature and the ocean. William Bock has exhibited extensively throughout the United States and has participated in several museum exhibitions. He has won numerous awards for his painting and his work is included in many prestigious collections including Merrill Lynch, AT&T, Allstate, The National Save the sea turtle foundation, the United States Embassy Bahamas and the IGFA fishing hall of fame museum show.