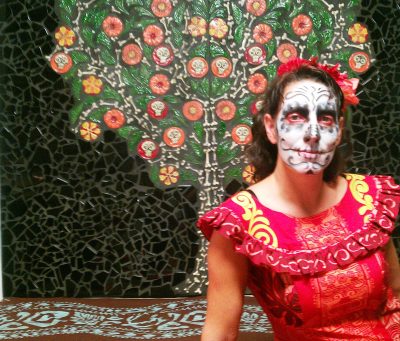 LuRu has been creating ceramic work since 1992.  She earned her BFA in Ceramics from the Ohio State University in 1995.  For the beginning of her career she predominantly made large scale figurative sculpture.  Increasingly, she began incorporating more materials into her works.  This mixed media direction led her to pursue a Masters Degree in Sculpture rather than Ceramics.

While in graduate school she explored metal fabrication, casting, textiles and video.  After earning her MFA degree in 2004 she worked as an adjunct professor at Baton Rouge Community College and as the Special Events Coordinator at the Baton Rouge Gallery CCA.  Although she enjoyed teaching art appreciation, sculpture and design classes, she found the event position more interesting.

Upon moving to Florida in 2006 she  continued her career in the event industry.  She spent four years designing  city wide and corporate events.  Although creating decor schemes was akin to large scale installation art,  she left the industry to return to her art.

She returned with renewed vigor to ceramics and started her artisan tile company, Tortuga Tile Works, in 2010.  She is attracted to tiles because of their ornamental quality. In addition the press molding process allows for a large quantity to be produced economically.  She has been part of the indie craft scene and has sold individual tiles throughout the region.  The past few years she has been focused on larger scale custom works.