How to Succeed in Business - Auditions

Posted by Pembroke Pines Theater for the Performing Arts ; Posted on
Call for Artists - DEADLINE : 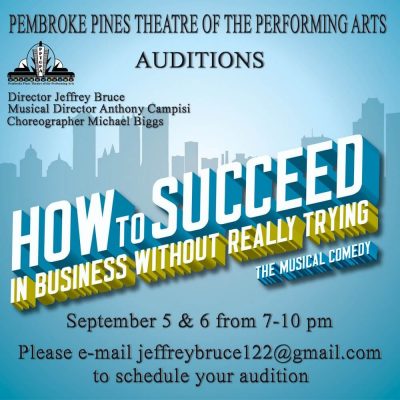 A satire of big business and all it holds sacred, How to Succeed in Business without Really Trying follows the rise of J. Pierrepont Finch, who uses a little handbook to climb the corporate ladder.  With songs by Frank Loesser, this comic gem won both the Tony Award for Best Musical and a Pulitzer Prize.  The exhilarating score includes “I Believe in You,” “Brotherhood of Man” and “The Company Way.”

The show requires a large cast, and features adult performers of all ages.  In addition to several speaking roles, the ensemble is showcased and is an integral part of the production.