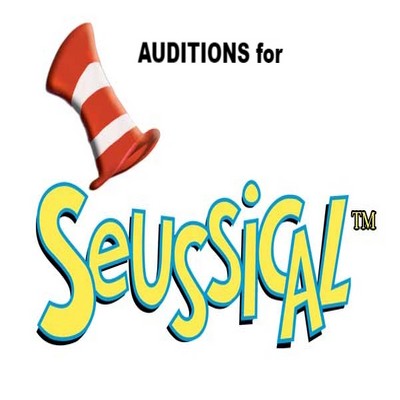 Based on the children’s stories of Dr. Seuss and one of the most performed shows in America, Seussical is a fantastical, magical, musical extravaganza! Tony winners, Lynn Ahrens and Stephen Flaherty (Lucky Stiff, My Favorite Year, Once on This Island, Ragtime), have lovingly brought to life our favorite Dr. Seuss characters in this production for all ages.

The Cat in the Hat – the narrator of the story and the child’s guide who also appears as several minor characters
JoJo – an imaginative and misunderstood young child
Horton the Elephant – a compassionate and determined elephant
Gertrude McFuzz – a shy bird who falls in love with Horton and endeavors to help him
Mayzie LaBird – Horton’s vivacious yet lazy and self-centered bird neighbor
Sour Kangaroo – the ill-mannered governor of the Jungle of Nool who carries a young kangaroo with her that is often represented by a puppet
The Bird Girls – Mayzie’s friends, who act as a Greek chorus
The Wickersham Brothers – a group of delinquent monkeys who serve as the Sour Kangaroo’s henchmen

General Genghis Khan Schmitz – the warmongering headmaster of the Whoville Military Academy
Mr. Mayor – the newly-elected mayor of Who-ville and JoJo’s father
Mrs. Mayor – the Mayor’s wife and JoJo’s mother
The Grinch – a notable resident of Who-ville who is responsible for organizing the Christmas pageant
The Elephant-Bird – Horton and Gertrude’s adoptive child, who hatches from the egg
Yertle the Turtle – the judge who presides over the Jungle of Nool’s court
Vlad Vladikoff – a sinister “black-bottomed” eagle
The Hunters – Horton’s captors who sell him to the circus