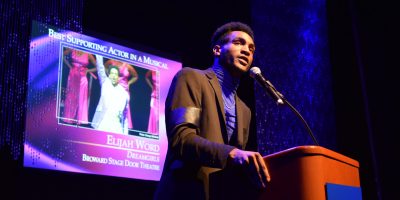 Scholarships are awarded to graduating high school seniors who have achieved a minimum 2.5 GPA and are intending to enroll in college to pursue a degree in theatre or journalism. The funds will be disbursed to the students selected when they have enrolled in college.

The scholarships will be presented during the 44th Annual Carbonell Awards Ceremony on April 6, 2020, at Lauderhill Performing Arts Center in Lauderhill, FL. One student from each of three South Florida Counties, Broward, Miami-Dade and Palm Beach will receive scholarships ranging from $1,000-$3,000.

The deadline to nominate for Carbonell scholarships is February 12, 2020. The application form, instructions and scoring criteria can be found at www.carbonellawards.org.

The scholarship is named for Jack Zink (1947-2008) who was a major voice in South Florida entertainment coverage for more than three decades. During his long career, he was employed as entertainment editor, columnist, critic and reporter at each of South Florida’s major newspapers – The South Florida Sun-Sentinel, The Miami Herald, The Palm Beach Post & Evening Times and The Fort Lauderdale News. Mr. Zink was the founder and a past president of the Carbonell Awards, a past president of The American Theatre Critics Association, and during his lifetime was a recipient of both the Sun-Sentinel newspaper’s highest honor, The Fred Pettijohn Award, given annually to the publication’s top reporters, and South Florida’s George Abbott Award for Outstanding Achievement in the Arts.