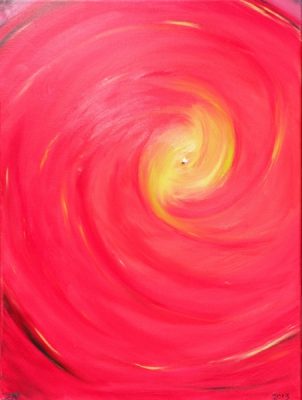 We are made up of particles and forces – photons, leptons, quarks, gluons. Our interactions with each other and with nature give rise to feelings, expressions, visions, art. Painting for me is a meditative mediation of science and spirit, nature and nurture, play and purpose. From the bag of emotions available when I paint I try to use joy, wonder, curiosity, sarcasm. I enjoy the tension between serious & subversive, perception & deception. A monkey taking a selfie, a beluga

We are made up of particles and forces – photons, leptons, quarks, gluons. Our interactions with each other and with nature give rise to feelings, expressions, visions, art. Painting for me is a meditative mediation of science and spirit, nature and nurture, play and purpose. From the bag of emotions available when I paint I try to use joy, wonder, curiosity, sarcasm. I enjoy the tension between serious & subversive, perception & deception. A monkey taking a selfie, a beluga teasing children, the sideways tilt of a dog’s head, that look the cat gives you – these evocations of the cosmic I attempt to convey in my art.

We all have a point of view, mine is slightly askew.

In 1992 John B Cooke IV was younger, still learning about life and living in an apartment in Richmond, Virginia. It all started with the new living room furniture (sofa and love seat) he and his partner had just bought. Once they had it in the apartment, they realized they needed a nice, large piece of artwork for over the sofa. Shopping for just the right thing became quite a task as they didn’t have a lot of money, the couch had a southwestern motif in the fabric, and all the paintings they saw that they liked were extremely expensive. The ones that they could afford looked as if drunken monkeys had painted them.
So after a few too many shopping trips coming home empty handed and too many weekends watching PBS, Mr. Cooke thought that he could paint at least as well as a drunken monkey, even though his last art class had been in the 8th grade, decades before. He had an idea for an abstract desert scene, so he did a quick mock up on an old Mac, bought some oil paints, a few brushes, some practice canvases and the big canvas. He practiced a couple of times and then painted the real thing.

His partner Jim liked it and he liked painting. Since he had spent about $250 on painting supplies, he just kept on painting. Those first couple of years he had probably painted close to 75 canvases, mostly landscapes in the wet on wet method of painting. Some were inspired by photographs and places he had visited, others by experimentation. He looked forward to the day they would buy a house and he could paint in his backyard. Somehow life intervened and painting was put on the back burner again. While not painting he created, composed and edited DVD compilations of his vacation photos under the SeaGoat ArtWorx brand.

Then two things happened to prod him back into painting. One was losing his IT job after 13 years with the same company which led to moving to Fort Lauderdale, Florida; the other was losing a very close friend to pancreatic/liver cancer. The last couple of years, this friend had been prodding him to get back into painting or some other creative outlet. His friend’s last text message to him was: “Don’t be afraid to go out on a limb; that’s where the fruit is”. So in honor of his friend and because he needed a creative outlet while continuing to seek employment, he restarted painting in 2013. Lately he is more interested in abstract expression than in mountain or desert landscapes. His current inspirations are derived from nature, experience, a skewed sense of humor, and a willingness to play, to make mistakes and to learn.

He primarily uses water mixable oil paints to reduce the environmental impact of his painting. He enjoys plein aire painting as he feels painting outside frees his creative energy better. He has also begun using painting knives more to allow the paint textures and pigments themselves have more of an impact, both as he paints and in the finished products. His favorite paint brush is a #2 filbert.

Rather than signing his name to his creations, he uses a modified monogram which incorporates his initials (JBCIV) and the astrological sign of Capricorn, the Sea-Goat, as that is his birth month. Prints of selected works can be obtained from seagoat-artworx.fineartamerica.com His most recent paintings can be seen online at facebook.com/SeagoatArtworx or by following him on Instagram @seagoatart. The artist can also be contacted via email at seagoat.artworx@gmail.com