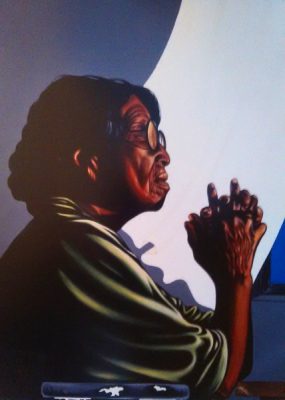 Professional Artist/Author, Ethridge Glenn  Lovett graduated from Pompano Senior High School in 1979.  He was awarded the ‘Most Artistic of his Graduating Class in 1979’ for high scores in English and all phases of Art [drawing, painting, sculpturing and technical drawing].  After graduating from high school, Lovett joined the United States Army to serve as a Specialist 4 infantry soldier, learning the skill of Radio Teletype Operator. He did so well in the field that he gained a Top Secret

Professional Artist/Author, Ethridge Glenn  Lovett graduated from Pompano Senior High School in 1979.  He was awarded the ‘Most Artistic of his Graduating Class in 1979’ for high scores in English and all phases of Art [drawing, painting, sculpturing and technical drawing].  After graduating from high school, Lovett joined the United States Army to serve as a Specialist 4 infantry soldier, learning the skill of Radio Teletype Operator. He did so well in the field that he gained a Top Secret Clearance in the handling of Authentication table communication. During his tenure at Fort Hood Texas, Lovett’s commanding first sergeant noticed his artist talent. He requested that Lovett paint a wall mural in the main conference room to boost company morale. Lovett painted a striking wall mural that drew the attention of high ranking brass such as Four Star General Shoemaker. After seeing the mural, General Shoemaker met with Lovett to tell him that he will be retrained and serve as an 81-Echo Illustrator for the US Army. After Illustration training, Lovett was stationed in Camp Casey, Korea as an Illustrator and Radio Teletype Operator, winning many awards for his art and communication skills. Lovett painted morale boosting murals in Fort Gordon – Georgia, Fort Hood – Texas, and Camp Casey – Korea.  Lovett received many prestigious military awards for his artwork, and overall military service.

After serving America, Lovett was hired by Broward County Libraries Division as a Library Specialist I due to his multiple art, computer knowledge and writing skills.  He was placed in charge of the forty-terminal computer center on the second floor of the South Regional /Broward College Library on Broward College South Campus. During his tenure with BCL, Lovett founded ‘The Creative Writing Club’ at SR/BC Library, and was commissioned to design several posters for the popular Sistrunk Historical Festival. He was then commissioned to create a wall mural in the Collier City Library to inspire young readers to cherish education. While working for BCL, Lovett studied Art and English at Broward College. As he studied advanced Creative Writing; Lovett won three consecutive short story contests back-to-back, winning over hundreds of college students. At the request of his English professor, Lovett submitted his short stories to be published globally.  His short story book, Short Stories For The Heart, is now sold on Amazon. Lovett also wrote several sci-fi novels; The Omura League Superheroes, Zoombatuu and the Journey to Hullera, The Chronicles of Officer Lazarus, and The Mighty Zoombatuu.  He also wrote and released several children’s books; Jabari And The King’s Heart and Pookie’s ABC’s.  Pookie’s ABC’s was so popular with children that the Broward County Libraries Division purchased multiple copies of Lovett’s book and placed them in their collection.

In February of 2003, Mr. Lovett was hired to paint a portrait for famed Movie Director/Actor, Spike Lee.  Mr. Lovett presented the portrait to Mr. Lee, who was overwhelmed by Lovett’s portrait.  Mr. Lee purchased the painting and also gave Lovett a copy of his children’s book with his signature inside. Mr. Lovett’s painting is now a part of Mr. Lee’s personal art collection.  Lovett was also hired by Sidney Miller, President of Black Radio Exclusive Magazine to paint a personal portrait for famous radio personality, Mr. Jack Gibson – better known as Jack The Rapper; the Father of Black Radio. He also painted a personal portrait for Jheryl Busby, President of Motown Records. Lovett was later commissioned by the Broward County School Board to paint an $85,000.00 wall mural on the cafeteria wall of Blanche Ely High School. The Broward School Board, students, and teachers; were all impressed with the mural displaying images of the school’s founder, Dr. Blanche Ely, images of teachers, students, football players, basketball players, accented with the powerful images of  two roaring tigers on opposite sides.  Lovett is a proud recipient of South Florida’s highly acclaimed Black Achievers Award.  Lovett was praised and saluted for his genius abilities in the areas of Literature and Art.  Lovett is presently continuing his studies in English and Art at Florida Atlantic University to enhance and increase his knowledge in both fields.