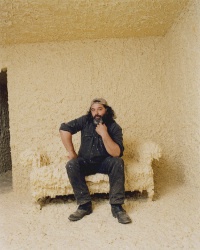 BIOGRAPHY Cosimo Cavallaro was born in Montreal in 1961. The son of Italian immigrants, Cavallaro was raised both in Canada and Italy. He attended art school in various countries before setting up shop as a sculptor in Montreal in the early 1980’s . Eventually Cosimo fell into film direction when a film director friend asked him to help out on a movie set. Within days he was assisting in set design. Soon he was a full time production designer working first on features and then on TV